Oh we do like to be beside the seaside.... 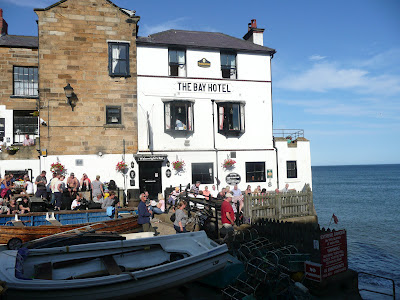 Taking advantage of the favourable weather forecast this weekend we shot off to the east coast to do a bit of walking on the North York Moors and paddle our toes in the North Sea. Friday found us high on Blakey Ridge wearing bobble hats and thermal vests but by Saturday the promised sun had appeared and we had a glorious day on the Cleveland Way. At teatime we found ourselves in Robin Hood's Bay and sat enjoying a pint or two outside the Bay Hotel while we watched the Coast to Coast'ers finish their walk.

It was a joy to watch their faces as they made it down the steep slope to dabble their boots in the brine and in some cases drop a pebble picked up a fortnight before on the beach at St Bees. I've written before about the camaraderie that grows up amongst long distance walkers and once again it was plain to see as the growing crowd outside the pub clapped each group as they appeared.

The biggest round of applause was saved for a gang of cyclists who'd made the crossing in just 3 days. Their mates strung ribbon across the road and cheered as the first of the Haddenham Hillbillies, all sporting Bradley Wiggins sideburns, even the girls, broke the tape. They were raising money for the Chilterns MS Centre and their JustGiving page says that they've reached £7,311.74, breaking their £7,000 target. Well done guys and gals.
Posted by Chris Grogan at 18:47