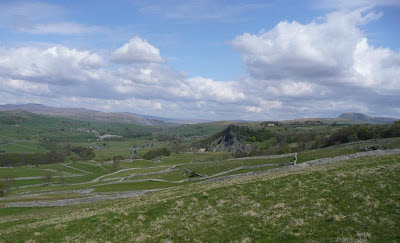 Posted by Chris Grogan at 19:44 No comments:

The quick answer is maybe, possibly, I think so, probably, yes!!

The Ride2stride Festival went better than we could have dreamed of.

When I arrived on Settle station that first morning there were already walkers milling about and an intrepid bunch of singers huddled together for warmth in the waiting room. The train came in - bang on time - and off they poured. Young and old - ok mostly old (er) it was a working day after all, male and female, some with sticks and some with dogs and all of them there for Ride2stride. The singers came out of the warmth and gave us a rousing chorus of "Raindrops keep falling on my head" and off we went.

One walk set off to search for waterfalls and the other to head for Elaine's tearoom at Feizor. I was backmarker with the second group and within half an hour had learned my first big lesson of the week. The word "Easy" means different things to different people. In a programme that included a treck over Mallerstang and a 16 mile ascent of Whernside some of us thought that 7.5 miles with a tearoom pretty much qualified as "Easy". To anyone not familiar with the limestone countryside around Settle that first clamber out of Stackhouse could have been the north face of the Eiger.

Second big lesson of the week was that a little more direction to walk organisers WOULD have been a good thing. Ok, I was wrong, I admit it. The walks that followed a very simple pattern - meet at station x off train y and walk to z all worked incredibly well with good numbers and hardly any hiccups (sorry everyone who was on the train that broke down and had their walk delayed by hours). The walks with more complex arrangements of buses and trains or meeting to catch trains to walk back to the number you first thought of were less well attended.

The music in the pubs was wonderful and turned the whole week into a Festival instead of just a list of walks. Lesson number 3 - make sure that the musicians aren't heading for their break just as the walkers arrive in the pub!

What else - well the talks were lively and well attended. The linked events - a walk during the day to look at something followed by a talk about it worked really well - even if one of the walk leaders did spend a bit TOO long looking with the result that his group had to jog the last mile for their train (see what I mean about a bit of direction for walk leaders). The weather improved as the week went on and as you can see we were in fine form by Sunday.

Finally the people - walkers came from all over including New Zealand, USA and Stoke on Trent. People stayed in cottages and pubs, in B&Bs and hotels and as the week went on we all began to recognise each other as we met on different walks.

So - will we do it again? It's a big question. Ride2stride is either a one-off or it's an annual event so saying yes to will we do it again is actually saying yes to a lifetime of Settle-Carlisle Walking Festivals. My feeling is that it IS worth making it an annual event but in order to do so we need a little bit more structure and a few more people involved with the organising. Any volunteers? We're meeting on Friday to have a chat about it so I'll let you know.
Posted by Chris Grogan at 09:52 No comments:

Where did May go?

It's June 1st today and I last posted on April 30th. What happened to May?
One minute I was shaking with worry about Ride2stride the next the garden's a hayfield and the festival is a distant memory.

More about Ride2stride later. In the meantime we've had a mini-hols in the Lake Dstrict where I took this photograph of Ennerdale Water. As I walked up from the village I thought I'd take a wrong turn - where was the lake? The reflection of the fellside in the water was so clear the whole valley was greened out 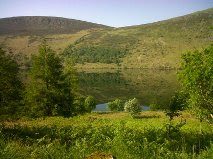 Posted by Chris Grogan at 08:49 No comments: