‘Ooh I’d love a week off’ thought Katie as she hung her wet coat on the back of her chair. It was months till she was due any leave. Not having kids she always got last dibs at the holiday rota.
Fancy Spring Bank in the Lake District? 'Sorry Katie that’s half term and Gemma’s off'. August in Brid? – not a chance, all the mums are away in August and as for Christmas... Katie hadn’t had Christmas off in years. She got Christmas Day of course but that was all. She was there till after six on Christmas Eve and in at eight on Boxing Day because ‘Christmas is all about the kiddies so Katie won’t mind.’ And she didn’t. Not really. She liked to keep busy.

Katie worked in the office of a large supermarket. She’d been there since she left school. Perched high above the shop floor she was the person that everyone went to when things went wrong. Her official title was Communications Assistant but everyone called her the Bing Bong Girl. Managers would rush by hissing instructions as they went ‘Quick Katie, call the cleaning team. There’s a family sized Wash n’ Go spilt on aisle 5.’ ‘A freezer’s down again’ Katie. ‘Tell customers the dessert section is closed.’ ‘Push the specials Katie, they’re on BOGOFF’  and Katie would sit in her glass fronted eyrie looking down at the customers and colleagues – they didn’t call them staff any more - and press her communicator.

Bing Bong Bing Bong. Katie calling. We have a special offer today on our own brand wholemeal pizza bites. Mmmm, all that delicious pizza topping on a base that’s actually good for you. Sandra is waiting in aisle 9 with samples to tickle your taste buds.

Katie was good at her job.

The run up to Christmas was always mayhem. And it got earlier every year. Bottles of Baileys slipping from arthritic fingers and smashing on the floor, small children lost and hysterical. Katie could never understand why people brought their entire family. It was a supermarket not an attraction. If she had kids she’d take them for a run round the park while Paul did the shopping.  But Katie wasn’t one to moan. Even when the hormone injections had made her feel like murdering someone she’d kept on smiling. That was Katie. Always cheerful.

But by the end of the first Saturday in December even she was exhausted. All she could think of on the way home was a hot bath and an early night. She hoped Paul had got chips on his way back from the match but if he hadn’t there was a tikka masala at the end of its sell by in her bag. He could have that. All Katie wanted was hot bath and a mini magnum. And maybe a foot rub if Paul's  team had won.
She could smell cooking as soon as she opened the door.
‘Paul,’ she called. ‘Is that you?’
‘In here’ he shouted. ‘I’m in the kitchen.’
And there he was, stood at the counter wearing a paper hat and adding chicken legs to plates piled high with sprouts and roasties and pigs in blankets.
‘Merry Christmas Katie’ he grinned.
Her quiet, smiley husband who lived for his rugby. Who’d held her head as she vomited every day of the pregnancy that only lasted six weeks and her hand the day they were told she was too old for another round of ivf.
‘It’s not Christmas for 3 weeks’ said Katie.
‘I know’ he said ‘It’s come early this year. Get your coat off. I’ve something to tell you.’

The next morning Katie was first in. She wanted to catch her manager before anyone else arrived. Jason would understand. He’d worked there nearly as long as she had.
‘The thing is’ she told him. ‘It’s a week in Lanzarote flying out on Christmas Eve, 5 star, all inclusive. That’s the prize and my Paul won it. In the rugby club draw.’
‘I’m sorry Katie’ he said. ‘You know how I’m fixed. All the mums have got that week off. The kids are off school and Christmas is all about ....’
‘....the kiddies. Yes, I know’ said Katie. ‘But is there nothing you can do? I’ve been here over 20 years and I’ve never once asked for time off in the holidays. Not once. Please Jason.’
‘No chance Katie. Head office agreed the rotas months ago. You’d better get back to work. There’s 4x4 blocking the delivery bay needs a Bing Bong.’
As she turned to leave his office Jason called her back.
‘Oh, and don’t think of calling in sick Katie. You’ll be out of a job if you do.’

‘And that was it.’ she told Paul that night. ‘Off you go Katie. Just like that. As if all I was asking for was an early lunch.’
And this time it was Katie who held Paul while he cried.
The next few weeks were as busy as ever. Katie and Paul didn’t mention the holiday again. They were used to dealing with disappointment. It was better to just get on with things. On Christmas Eve Katie was up before Paul was awake.
‘I’m off Paul’ she called out as she left the house. ‘Don’t forget you’re picking me up. I’ll text when I’m ready to leave.’
By 2 ‘o’clock the store was heaving.
‘Just how many cans of lager did people think they’d drink between now and Boxing Day morning’ wondered Katie as she straightened her reindeer ears and switched on her microphone.

Bing Bong Bing Bong. Katie calling. On behalf of the management I’d like to wish you all a very merry Christmas. And to thank you all for being such wonderful customers we’d like to offer you a FREE 10 minute trolley dash. Just fill ‘em up ladies and gentlemen and head for the doors.

And with that Katie grabbed her coat and ran down the stairs to find Paul waiting in the car with the suitcases she’d hidden in the boot that morning.
‘Quick Paul’ she said. ‘Drive. Our plane leaves at 4.’
Posted by Chris Grogan at 10:06 No comments:

Ten for a Tenner (or less!)

I love the Christmas Gift Guides that fall out of newspapers and magazines at this time of the year but OH - the prices! £150 for this, £200 for that and if anything is even vaquely affordable it's dismissed as a Stocking Filler.

Now I love my family and friends but I've no intention of putting myself into debt so this morning I set off to find 10 gifts for under a tenner each, and where better to look than our own lovely village of Saltaire.

First stop Salts Mill where I found this beautiful Te Neues notebook for £9.99 in the bookshop. Anyone would want to keep a diary with a journal like this.

Then down to Saltaire Tourist Information where a bar of wool fat shaving soap caught my eye. I remember my dad saying his hands were as soft as a baby's after a day or two spent clipping ewes. The lanolin in the sheep's wool is a great moisturiser and at £6.25 this is a bargain - if you can find a man without a hipster beard that is. 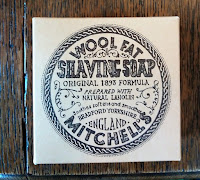 Coasters next from the Rad Studio on Victoria Road. Just £2.50 each and in a great range of colours so you could put together 4 for £10 to match or clash with any room.

One of Saltaire's best kept shopping secrets is The Craft House on Saltaire Road. Keep walking up Victoria Road and turn right and you'll find it. It has a great range of inexpensive gifts, many of them made by local people. I picked out 2, both priced at £8 each. This gorgeous hand knitted Saltaireosaurus 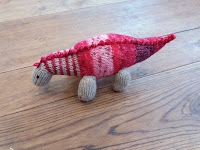 and a Shiraz scented candle that shouted Christmas in every sniff. 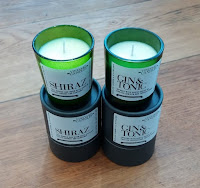 I love the Butterfly Rooms on Gordon Terrace and I've bought many special presents there. Today on my 'under a tenner' quest I found these socks. Beautiful colours and designs and presented in their own gift bag for only £6.99 a pair.

Next I crossed the road to the Co-op where I picked up 3 bottles of Saltaire beer for £5 including the very Christmassy Triple Chocoholic. 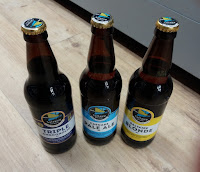 Then because gifts don't always have to be about stuff - sometimes only an experience will do - I went into the award winning Jeanette's Cakery to ask about afternoon tea. Jeanette provides a voucher for her fabulous afternoon tea for just £10 per person. 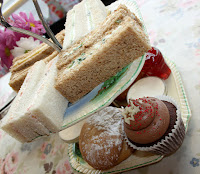 Now as some of you know my passion is walking so for my last 2 gift ideas I'm sticking close to my heart. Firstly a Dales Way mug for just £8 from Trek and Trail in Salts Mill 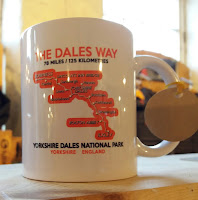 and finally our own Dales Rail Trails, also available for £8.99 from Trek and Trail or post free from www.dalesrailtrails.co.uk It's a fantastic little book of 32 fabulous walks from stations on the Settle to Carlisle line. Just jump on the train in Shipley and you'll soon work up an appetite for tea at Jeanette's. 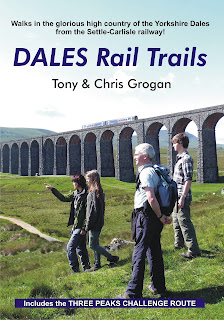 So there you have it. My ten for a tenner so if you're comng to Saltaire this weekend why not bring your shopping list with you. Choose carefully and you'll have enough left for a glass of mulled wine. 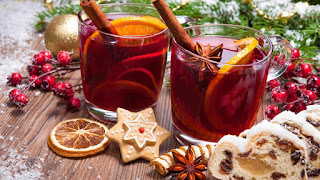 Posted by Chris Grogan at 16:12 No comments: