Not Much Of A View


Recently I wrote a short story that won Ilkley Literature Festival's Spring competition. It's called "NOT MUCH OF A VIEW" and here it is.

His daughter called it downsizing and talked as if she’d done him a favour.


‘Just think’ she said, ‘no more lawns to mow or beds to weed.  Just think of all the time you’ll save.’

‘What for?’ he thought, but didn’t ask. She’d only have had some smart reply, suggesting he played bridge or took up art. What’s the use of saving time if you’ve nothing to spend it on? Nothing to do all day except look out of the window. At least at the old house there had been something worth looking at. An uninterrupted view of foliage and sky stretching out from the end of the garden, so that from the dining room window he couldn’t tell where his property ended and the fields began.

‘It’s so big Dad, and isolated’ she told him.  ‘At least now you can walk from the flat to the shops. You don’t have to get the car out just to buy a paper or a pint of milk.’

There was that he supposed. He was driving less and less these days and sometimes whole weeks had gone by without him leaving the house. He could get all the news he wanted from the radio and his daughter stocked the fridge on her weekly visit. Weekly glimpse more like. He was lucky if she stayed an hour, rushing in with her supermarket bags and grabbing the hoover, sometimes without even taking off her coat. Her energy exhausted him.

He looked around. Purpose built the estate agent called it. Living cheek by jowl he said. What if he could hear the neighbours through the wall? That would have been unheard of in his old home. The nearest house was over a mile away and since the old lady died he didn’t know who’d bought it.

He heard a noise. Not from next door but coming from outside. He crossed the room and looked out. On the other side of the road between a small car park and a pub that had seen better days was a well kept green. His daughter had made a joke about it when she moved him in. Something about offering his services if he found he missed his ride-on mower.  A small crowd had gathered, shouting out greetings and laughing together. He watched as they unpacked balls and mats from cylindrical bags and set up their game on the square below. A bowling green, he overlooked a bowling green.

He thought back to his old house, remembering the hours he had sat looking out at the horse chestnuts, stately guardians of his privacy with their creamy candelabra and fox brown fruit. It was a long time since anyone had gathered conkers on his lawn.

He opened the glass doors and stepped out onto the tiny balcony. As he did so a woman in a red coat looked up from her game. She smiled and raised her hand. Shyly he waved back.
Posted by Chris Grogan at 13:15 No comments:

My idea of a good time is tramping 100 miles across the Yorkshire Dales with a bag on my back and a dog by my side.
It's a great way to spend a week or more but not so good if you're just looking for a leg stretch on a Wednesday afternoon. That's where having a great selection of local walks comes in, easy strolls either from the house or a short drive away. So this week I pulled an old 1991 guidebook from the bookshelf and explored a path I'd first walked over 40 years ago, a quick 3 miles through Goit Stock woods to the waterfalls on Harden Beck above Bingley. 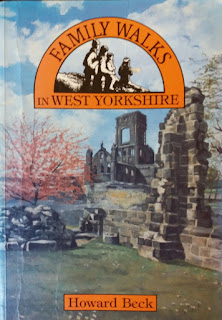 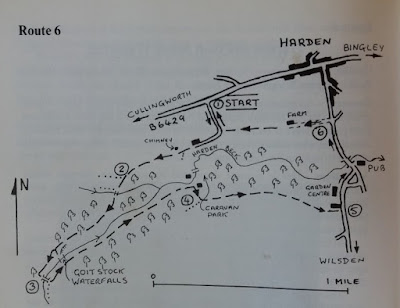 And it was so worth it. It was cool and shady and no-one else was about. Wild honeysuckle scented the air and the only sounds were tumbling water and birdsong. Not quite the precious escapism of a multi day trail but not far off.

Posted by Chris Grogan at 09:09 No comments:

Perks of the Job

I'm the secretary of the Dales Way Association and a couple of years ago the committee decided to replace some old, out of date information boards with these smart new signs.
But what to do with the old ones? Rather than consign them all to landfill I tucked one under my arm and brought it home, where it lingered out of sight and out of mind behind the shed, until now.
What you might call a perk of the job!
Posted by Chris Grogan at 11:16 No comments: