One of the joys of working for yourself is the chance it gives you to play hooky.
Today I was on my way home from an early delivery in Grassington when a break in the clouds sent down a shaft of sunlight with my name on it. I quickly turned the van up a Yorkshire Water track, parked, and set off around Grimwith reservoir. 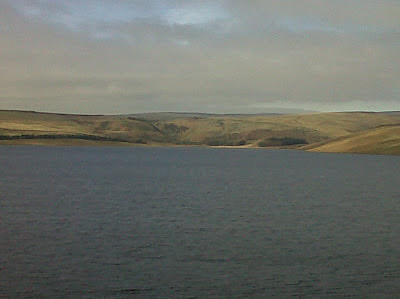 It was 4.5 miles round, mainly on a track, with just a couple of other dog walkers in the distance and the honk of greylag geese for company. It cleared out a few cobwebs, gave me time to think and best of all nobody knew I was gone.
﻿﻿ ﻿﻿
Posted by Chris Grogan at 17:02 No comments:

A hell of a walk

And the day started out so well. We were up before the alarm even pinged, shower, coffee and out at the bus stop before eight. We were headed for a day on Mount Teide, at 3,718m or 12,198ft, the pointy bit in the middle of Tenerife is the highest mountain in Spain.
We'd planned the day like a military operation: checked and double checked bus timetables, pre-booked permits to allow us to walk on the rim of the crater, packed fleeces and woolly hats along with the suncream and shorts - what could go wrong?
The first niggle of doubt arose when, in my very schoolgirlish Spanish, I told the driver of the first bus that we were planning to connect with the bus to Las Canadas. I dismissed his stricken look as incomprehension and sat down. Thirty minutes later we were still tootling in and out of the resorts and I began to think it wasn't incomprehension at all, more like "not on your nelly". Eventually though we pulled into the bus station in Playa de las Americas at 9.10. Phew - 5 minutes to spare, now where's the stand for Mt Teide? It was curiously quiet, in fact there was nobody there at all. They were all on the bus that had left at 9 o'clock not 9.15 as the guide book, the 2012 bus map AND the bus company's own website had stated.

Hey ho now what? A quick regroup and we were back on the bus, this time heading for Adeje, a little town perched above the coast. Ignoring the bars with their beers and their cafe con leches (hard to believe I know) we climbed the steep main street to the start of a popular walk through the Barranco del Infierno, Hell's Gorge.

A large sign greeted us - "Barranco del Infierno sendero cerrado" - footpath closed.  NO! Back down the street to the tourist office where a very patient long-suffering woman explained, clearly for the 42nd time that day, that "Si, barranco cerrado" and "No, not because it's Tuesday, peligro de muerte"
What? - danger of death?
"Si, muerte - falling rocks" she explained but then went on to say that even though the authorities had closed the route we could, if we wanted to, enter the canyon at our own risk. Clearly the Health and Safety mafia have only dipped a toe into Tenerife waters.We tootled back up the street and found that sure enough although the entrance gate was shut and padlocked someone had removed a couple of fence posts and we were easily able to squeeze through.
The walk itself was amazing, a 6.5k round trip to the highest waterfall on the island, something of a trickle after the very dry winter.
It's a walk of two halves, the path follows the side of an arid ravine...

before dropping onto the valley bottom where the vegetation gets greener and lusher...
﻿﻿until finally we came to the end of the trail...
Posted by Chris Grogan at 19:00 No comments: