I've been on a bit of a learning curve recently. Last week I learnt it was ok to take pleasure, pride even, in enjoying things for their own sake AND I learnt it was ok to share that vulnerability. Not just to present a polished version of myself to the world but to go for it warts and all. Yesterday I climbed a bit further up the parabola and realised how comforting and reassuring the familiar is.
Occasionally I go out to groups to give a talk about our long distance walk, A Dales High Way. I chat a bit about growing up in the Yorkshire Dales and the gulf that existed between us, the farm kids who treated the fells as our back yard, and the hikers who came searching for the countryside that we took for granted.
I confess to my own damascene conversion when I realised that fell walking was the way back from my adult life as a townie to the landscape that I love so much. And finally I take the audience on a whistle stop tour of A Dales High Way itself, 90 miles in about 19 minutes, a slide show of the best views of the walk.
Normally I look forward to these events. I enjoy them very much. But yesterday nerves got the better of me. I spent several sleepless nights convincing myself that I had nothing to say, no pictures to show, that my audience wouldn't have heard or seen before. That they would know far more than me and at best they'd be bored and at the very worst they'd think I was a jumped up imposter who had no business being there.
And I was right in a way. Yesterday's audience were very well informed, very experienced. They were people who had walked or farmed or lived in the Dales for decades. They did know more than I ever would but when I looked out at their faces all I saw were smiles of recognition and nods of agreement and I realised that we don't always want to be entertained by the novel or the new. Sometimes we get great pleasure from the comfort of the familiar.
Onwards and upwards Chris. Onwards and upwards.
Posted by Chris Grogan at 16:01 No comments:

'If a thing's worth doing it's worth doing well.' Do you remember that?
It was the mantra of my childhood. A worthy sentiment designed I imagine to urge small children to try our hardest, to do our best and give it our all. But it had a dark side. A hidden message that it's not ok to do things badly; to bumble along cheefully singing bum notes and coming last in cross country and that has had an impact. A lifetime of avoiding the community of choirs and missing out on the joys of fell running, of saying, 'No, I can't' when I should have been shouting 'Yes, I'll try.' Of trying and failing and loving it anyway.

I'm a writer. I write short stories and poems and this blog. Once in a while I share something that I've written with my writing group and occasionally
with the outside world. But only if I think it's good enough. Everything else gets binned. I have no middle ground. No sense of 'just ok' or 'it'll do' or even 'it's a work in progress' and I think that stems from the long held belief that if I'm not doing it well I shouldn't be doing it at all.

So I've taken up sewing. Stitching little patchworks and embroidering pictures that I can do in front of the telly just for the fun of it. 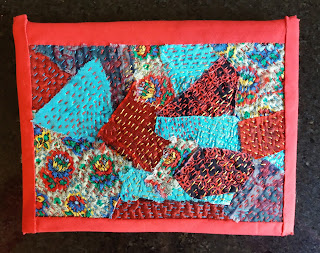 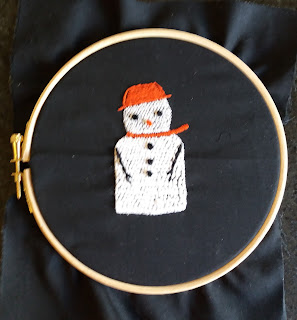 There, I said it - JUST FOR FUN. The results aren't great. I'm fighting the impulse to pull out the wonky stiches and abandon the failures. It's not the end result that matters and it doesn't need to be perfect. 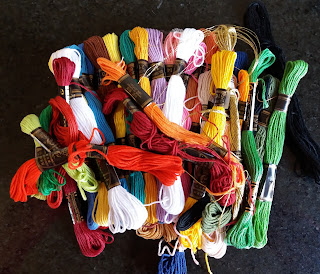 What matters is that the selection of coloured thread and the piecing together of fabric is a tiny burst of joy. That the in and out of the needle is calm and soothing and that the concentration needed is just enough to allow me to watch Master Chef at the same time.

Finally, I'm learning that if something's worth doing it's worth doing. Full stop. Not well or badly - just doing - so I'm going to stop being so hard on myself and fish some of those poems out of the bin. Look out Shipley Writers' Group!

After The Snow (one from the bin)
Back to work to a flurry of photos, a swirling of stories, a whiteout of words
Drifts of dramas and igloos of images
Banks of boasting and graupels of groaning
Anecdotes in avalanches slipping and sliding
An endless blizzard of snow, snow, snow.....

Posted by Chris Grogan at 09:17 No comments: