Bloomin' weather forecast! For days the meteorologists had been predicting that Friday would be the best day of the week so despite low cloud we set off early to check out another of the "ones that got away".
﻿﻿
﻿﻿This 9 mile circular from Settle follows ancient trade routes across the moors above Long Preston. It was never going to make the book as the route runs south of Settle and the parameters of Dales Rail Trails are walks between Settle and Kirkby Stephen. It's also outside of the great limestone walking routes of the south western Dales but it's not without interest, offering long distant views and almost guaranteed peace and quiet. We never saw another soul all day. ﻿﻿ 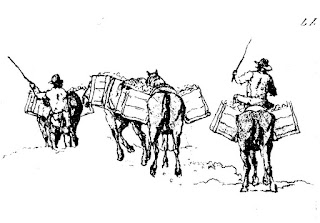 ﻿﻿
We left Settle up an old moor road called Mitchell Lane, which was the main trade route between Settle and Long Preston until the turnpike road (now the busy A65) opened in 1750. Whilst I love walking in open countryside I do get a buzz from following the thousands of feet and cart wheels that have passed before me over the centuries.
There was snow underfoot as we crossed a couple of fields - but this wasn't the deep and crisp and even sort. The snow was light, the ground was sodden and we made a bambi-ish clamber up the only real ascent of the day.
﻿
﻿Back onto a rough track we headed south with great views over Ribblesdale and the Trough of Bowland.

As we neared Long Preston we had a choice - into the village and the Maypole for a liquid lunch or keep going and look for a sheltered spot to eat the butties. The butties won - the pints could wait for the end - and we headed east to start the circular return. We found a perfect lunch spot by a footbridge that crosses Long Preston Beck - a stream that starts life high on Rye Loaf Hill, runs east as Stockdale Beck then plunges over Scaleber Force before continuing south as Scaleber Beck, then Long Preston Beck before finally joining the river Ribble.
More fields brought us to another beck - Bookil Gill Beck which is usually easily crossed on a couple of large stones. Not today - the melt water from the fells had swollen the beck to a torrent and we were forced upstream to look for a crossing point. A fallen fence post provided a precarious tightrope that wobbled ominously - luckily the dog ran ahead to test its safety!
﻿﻿﻿﻿﻿
By now horizontal snow was creeping into every orifice and we trudged, heads down, along Langber Lane, an ancient drove route that in Elizabethan times linked Settle with Otterburn and Skipton. We took a short detour into Scaleber Woods, where the waterfall of Scaleber Force made a fine sight in full spate, before dropping back down into Settle and that waiting pint.

Despite the weather it was a grand walk, not very taxing but (until the white out) with rewarding views in both directions.
The following morning we got up to blazing sunshine which just goes to show the only reliable way to forecast the weather is to open the curtains and peer out.
Posted by Chris Grogan at 12:47