I've got a confession to make.

Despite spending half my year helping to organise the Ride2stride Festival and the other half banging on about it I've never actually been to a walking festival. Other than R2S that is. So this week I decided to do something about it and headed over the border into Lancashire and the Pendle Walking Festival.

It's easy to overlook Pendle in favour of its more glamorous neighbours, the Yorkshire Dales and the Lake District, but it's an area full of charm and interest where walking is king. There's a comprehensive year round programme of walks and the annual Pendle Walking Festival is billed as the biggest free walking festival in the country. This year's programme offered 68 guided walks from a family friendly 2 miler to feed the ducks to the "very hard"  23 mile Pendle Marathon. There are plenty of references to witches including Alice Nutter's Way and the Lancashire Witches Walk. This is a 51 mile long distance walk from Barrowford to Lancaster Castle following in the footsteps of the accused to their trial and subsequent executions in 1612. The festival programme offered the walk over 4 days and I wish I'd seen it earlier. Definitely one for the to-do list.

Instead I chose an 8 mile linear 'hard' walk from Colne to Gawthorpe Lodge, stopping at Smithson Farm for tea and cakes before returning to the start by bus. Eighteen of us, including a walk leader and back marker, left Colne along the Leeds Liverpool canal and headed for Barrowford.

I was lucky enough to walk with a local man who had lots of information about the village and its history. The day was further enlivened by a fellow walker who greeted everyone we met seemingly by name. I'd just started to think she came from the biggest family in Lancashire when it was revealed she was the local councillor and we were walking through her patch. The route continued through a combination of lanes and tracks with glimpses of Pendle Hill shrouded in mist.

As someone said, "If you can see Pendle Hill it's going to rain. If you can't it's already raining". Finally we reached Smithson Farm where we found a mini mining museum, a campsite, rescue ponies and a tea room with the lightest scones outside of Yorkshire. The walk finished with a lovely 2 miles through open countryside and along the banks of the river Calder where we spotted a heron and were accompanied for much of the way by a flock of circling Canada geese.

I arrived in Colne on my own but with no worries about spending the day alone. If our own Settle-Carlisle festival is anything to go by I was expecting a friendly bunch and I wasn't wrong. The first person I met was also a Ride2strider and everyone went out of their way to be welcoming. I came away no longer a walking festival novice and determined to seek out more events like this. It's a brilliant way to explore our wonderful countryside in the company of knowledgeable locals. Now where's that list. I think I'm hooked.
Posted by Chris Grogan at 10:17 No comments:

Run for the Hills

I live near the Leeds Liverpool canal in Saltaire. So near that I can watch the boats go by from my office window and wave to the dog walkers on the towpath. It forms part of my own dog walk most days and a vibrant, lively place it is too. There are boats and bicycles, parents with toddlers and serious walkers. There's a floating cafe and a swing bridge and locks. There's football in winter and cricket in summer on the adjacent playing fields and all year round the stunning architecture of Titus Salt's Victorian mill village.

Canals rock. So it was with no hesitation that I agreed to walk the Union and Foth and Clyde canals between Edinburgh and Glasgow. There was a logic behind this abandonment of my beloved hills to follow the same contour for over 50 miles. In the last year we'd walked the Pennine Way from Edale to Kirk Yetholm (for our Heart of the Pennine Way book), the West Highland Way from Milngavie to Fort William (for fun) and a combination of St Cuthbert's Way and the Southern Upland Way from Kirk Yetholm to Edinburgh - Are you keeping up? Maybe a map will help.

Anyway we had a gap and although I can happily live with gaps in my life Tony likes to finish the job (it's a man thing) so, clutching Cameron McNeish's Scotland End to End guide, we set off to join the dots.

It was flat and long and pretty enough but although we made good speed it was surprisingly difficult to keep motivated.  We rarely met another soul. There were cyclists and local dog walkers around the towns and villages, there were the occasional walkers on the John Muir Trail and once in a flood a boat went past. For a major navigable waterway across the centre of Scotland it was seriously short of boats. The Leeds Liverpool it was not. 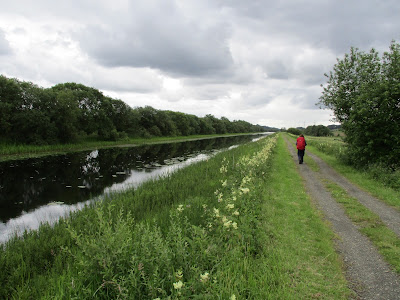 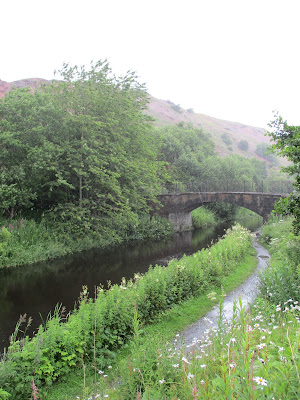 The highlights were all off route. The pretty little canal basin at Linlithgow, the fabulous, amazing Falkirk Wheel and the climb (hurrah) up Bar Hill to the Roman fort on the Antonine Way.


The accomodation was great, we ate and drank well and everyone we met was welcoming and friendly. I enjoyed the psychological achievement of crossing the country and the little break from daily life but as we headed west into Milngavie and the Campsie Fells came into view my heart began to lift and my tired legs revived.

Am I looking forward to some fell walking? YES, YES,YES.