And on a completely different note...

It was all high excitement down at t'allotment this week. Mark Diacono (ex-River Cottage - you might have seen him on the telly) paid us a visit. He's working on a new book called My Cool Allotment and we might be in it. That's the royal "we" of course. I don't think photos of bindweed and scabby spuds quite hit the cool button but my lovely neighbour Alison's pretty herb lined path might just make it. 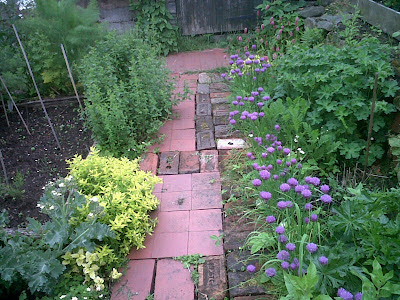 PS the e-book's out! It hit the virtual shelves this morning and you can take a peek at http://www.skyware.co.uk/shop_eguide.htm

I'm really pleased with it, especially the way Frank Gordon's beautiful black and white line drawings have turned out.

Thank you Sheila and Frank. It's been a pleasure working with you both.
Posted by Chris Grogan at 10:54 No comments:

Our new project is almost ready to launch. It's got it's feet on the blocks just waiting for the starter's gun (not that I'm missing the Olympics or anything). This one's a bit of a departure for us. It's an e-book. 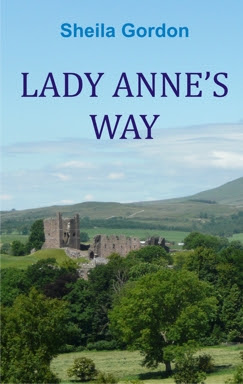 The Lady Anne of the title is Lady Anne Clifford, a 17th century aristo who spent much of her adult life fighting to regain the family estates which had been left to her uncle. Finally in middle age she inherited a large chunk of the north of England and at the age of 60 set about restoring the castles and churches which had pretty much fallen down over the years.
﻿﻿﻿ ﻿﻿﻿Three hundred and fifty years later a local walker, Sheila Gordon, became fascinated by Lady Anne and particularly by the journeys she took between the properties to check on the work. In 1995 Sheila created a long distance walk that started in Skipton and went 100 miles north to Penrith calling at the castles of Skipton, Barden Tower (not strictly speaking a castle and not actually belonging to Lady A but she fixed it up all the same), Pendragon, Brough, Appleby and Brougham.
﻿ ﻿
The guidebook is now out of print and we've been working with Sheila to update and republish it. The print version will be out in early 2013 but in the meantime we're publishing it as an e-guide which can be read alongside OS maps of the route.

Posted by Chris Grogan at 14:53 No comments: